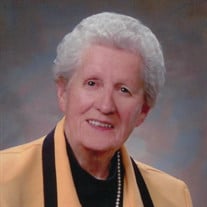 Betty L. Renth, 89, of New Baden, passed away Monday, August 31, 2020 at St. Elizabeth Hospital in O’Fallon. She was born February 10, 1931, the daughter of W. F. and Amelia E., nee Trippel, Renth. Betty is survived by her friend, Gloria Foreman. In addition to her parents she was preceded in death by a brother, W. E. Renth; two sisters, Wilma P. Renth and Arline Renth Barrow; and a brother-in-law, G. H. Barrow. Betty worked in the Scott Air Force Base civilian personnel office and in 1955 she joined the Scott Credit Union Board of Directors. In 2016 she was honored for 60 years of service. Betty was a driving force behind Scott Credit Union success; she began serving as the Chairman of the board in 1971 and received national and state recognition for her dedication and service to SCU and the credit union industry. In 1988, she was elected to a three year term on the Board of Directors of the National Association of Credit Union Chairmen. In 1997, Betty was awarded the spirit of service award and was named Volunteer of the Year by the Illinois Credit Union and was inducted into the Credit Union Hall of Fame in 2002. In 2005, Betty was honored during the national annual convention of the National Center for Credit Unions. She received second runner up for the Director of the Year Award. In 2006, Betty was inducted into the Defense Credit Union Council Hall of Honor. This hall of honor recognizes individuals whose exceptional contributions over the years have made a significant difference in the defense credit union community. Betty was also inducted into the Who’s Who in America’s Credit Union. In 2012, Scott Credit Union’s home office building was named the Betty Renth Building. Betty was given the title Director/Emeritus of the SCU. Ms. Renth established the Betty Renth Charitable Foundation which offers scholarships to high school seniors graduating from Carlyle, Wesclin, Central, Mater Dei, and Mascoutah high schools. Betty used her trust funds from the W. E. Renth trust to establish the W. E. and Betty Renth Heart and Vascular Center at the new St. Elizabeth Hospital in O’Fallon. The two had a connection to O’Fallon through Dr. Edward Trippel, an O’Fallon physician who was their uncle. Betty was a member of the New Baden Legion Post 321 Auxiliary and a lifelong member of Zion United Church of Christ where she served several terms on the church council, including treasurer and president. She was a supporter of the Kaskaskia College Trenton Education Center. Visitation will be held Thursday, September 3, 2020 from 3 p.m. until 6 p.m. at Nordike Funeral Home in New Baden. Please wear a mask, practice social distancing, and refrain from handshakes or hugs. Memorials may be made to the Clinton County Humane Society and will be received at the funeral home.

The family of Betty L. Renth created this Life Tributes page to make it easy to share your memories.

Send flowers to the Renth family.