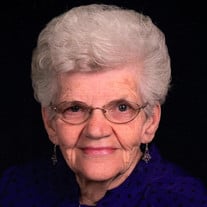 Bernice Emma Anna Martha Zimmermann, age 84, formerly of Ferrin and more recently residing at Villa Catherine Assisted Living Center in Carlyle, passed away on Sunday, February 4, 2018 at St. Mary’s Hospital in Centralia. She was born March 29, 1933 near Hoffman, the daughter of Emil and Quinta (Knolhoff) Brammeier. She married Wilbert O. Zimmermann on July 6, 1954 in Ferrin and he preceded her in death on June 11, 1995. She is survived by two daughters: Rita (Ron) Carpenter of Hoffman, and Ronda Zimmermann of Robinson; two sons: Randy Zimmermann and Roger (Mia) Zimmermann all of Ferrin; four grandchildren: Shawn (Jennifer) Carpenter of Carlyle, Sara (Robert) Felty of Port Orchard, Washington, Samantha Zimmermann and Katherine Zimmermann both of Ferrin; three great grandchildren: Lilly Jean Borel, Felix Joseph Borel, Lane Joseph Carpenter, and a fourth great grandchild expected in March; a sister: Julia (Ralph) Karmeier of New Minden; two brothers: Edmond (Alrene) Brammeier of Okawville, and Carl (Louise) Brammeier of Carlyle; sister-in-law: Doris Brammeier of Ferrin; and brother-in-law, Bill Kleiboeker of Hoffman; as well as many nieces and nephews. In addition to her parents and husband, Mrs. Zimmermann was preceded in death by her father-in-law and mother-in-law, Carl and Lena Zimmermann, her sister, Eileen Kleiboeker, her brother, Delbert Brammeier, brothers-in-law and sisters-in-law, Walter and Joyce Zimmermann and Elmer and Mabel Mattmiller. Bernice was confirmed at Bethlehem Lutheran Church in Ferrin on April 14, 1946. She was a “mother’s helper” before her marriage and lived with families to care for new mothers and babies. She was a member of Bethlehem Lutheran Church in Ferrin and was active in the Ladies Aid and LWML. Bernice was most at home in her kitchen and loved to cook and bake. She was an avid Cardinal fan and prided herself in knowing all the birthdays and anniversaries of her extended family. Funeral services will be held at 10:00 AM on Saturday, February 10, 2018 at Bethlehem Lutheran Church in Ferrin with Pastor Stephen Krenz officiating. Interment will follow at Bethlehem Lutheran Cemetery in Ferrin. Visitation will be held from 4:00 until 8:00 PM on Friday, February 9, 2018 at Nordike Funeral Home in Carlyle and on Saturday from 9:00 until 10:00 AM at Bethlehem Lutheran Church in Ferrin. Memorials made in memory of Bernice are suggested to Bethlehem Lutheran Church in Ferrin, Trinity Lutheran School in Hoffman, or to the Gary Sinise Foundation for Wounded Veterans and will be received at church or at Nordike Funeral Home in Carlyle, 740 Fairfax Street, Carlyle, IL 62231.

The family of Bernice E. Zimmermann created this Life Tributes page to make it easy to share your memories.

Send flowers to the Zimmermann family.