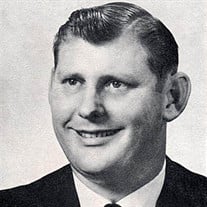 Bernard F. “Bernie” Hilmes, age 83, of Carlyle passed away on Monday, October 8, 2018 at his home surrounded by his loved ones. He was born on January 9, 1935 in Trenton, the son of Herman and Rosalia (Daniels) Hilmes. He married Carol Orlet on August 14, 1954 at St. Paul Catholic Church in Highland and she preceded him in death on February 3, 2015. He survived by six sons:; Dan Hilmes and wife Carol of Breese, Bob Hilmes and wife Peggy of Carlyle, Larry Hilmes and wife Marla of Carlyle, David Hilmes of Orlando, Steve Hilmes and wife Donna of Carlyle, Bruce Hilmes and wife Stacy of Carlyle; his grandchildren: Jennifer(Gary) Towell, Jonathan “JD” (Vicki) Hilmes, Brian Hilmes, Christopher (Tara) Hilmes, Michael (Jessica) Hilmes, Charity (Roger) Fuehne, Heather (Justin) Florczyk, Lauren and Katelyn Hilmes, Ashley (Dustin) Minton, Ryan Hilmes and Matthew (fiancé Miranda) Hilmes, Bailey, Nathan and Natalie Hilmes; great grandchildren: Lily and Caleb Towell, Lainey Hilmes, Luke and Olivia Hilmes, Cody, Jensen, Joshua and Matthias Hilmes, Savannah and Landen Fuehne, Aubrey and Amsey Florczyk; his brother: Herman Hilmes of Huntsville, AL; and sister-in-law, Mary Jane Orlet of Highland. As well as many nieces and nephews. In addition to his wife Carol, he was preceded in death by his son, Gary Hilmes and his brother-in-law, Walter Orlet Jr. Bernie was an insurance agent for Prudential Insurance. He started as an agent in Trenton on September 18, 1961 and transferred to Carlyle in 1974 where he retired in December of 1990. In his 29 years with Prudential he achieved many awards and was considered a very successful agent for that era. He worked 6 years a sales manager and was featured in the LOOK magazine where he was recognized for his achievements. Mr. Hilmes joined the Carlyle Lions Club in 1974 and was a member for 35 years. During those years he held many different positions, some of which included President, Secretary, Zone Chairman, and Treasurer. Bernie was responsible for starting and running the eye glass collection program which collects old eye glasses and donates them to less fortunate people. He also was the founder of the annual Easter Egg Hunt that the Lions Club hosted. He joined the Knights of Columbus in 1962 and was a member in both Trenton and Carlyle councils. Bernie was an avid Carlyle Indians sports fan and enjoyed watching his children and grandchildren every opportunity he could. “I met the man way back when, He had a lot of debts then. His white house was full to the brim, with folks counting on him. At that time he was at the grocery store, working his eight hours and more. He’d pull out pictures for me to see, of his newly started family. Then as he gained some wisdom and age, He realized he needed a higher wage. And with the attitude of I know I can, he became our insurance man. Retired now with all the boys full grown, his attitude still has not flown. Whether he’s at work or having fun, his I know I can gets things done.” – Minnie Candle A Funeral Mass of Christian Burial will be held at 10:00 AM on Saturday, October 13, 2018 at St. Mary’s Catholic Church in Carlyle with Fr. George Mauck officiating. Interment will follow at St. Mary’s Catholic Cemetery in Trenton. Visitation will be held from 4:00 until 8:00 PM on Friday, October 12, 2018 and from 8:00 until 9:45 AM on Saturday at Nordike Funeral Home in Carlyle. Expressions of sympathy in memory of Bernie may be made to St. Mary’s Catholic Church or Carlyle Athletics Booster Club and will be received at Nordike Funeral Home, 740 Fairfax Street, Carlyle, IL 62231.

The family of Bernard "Bernie" Hilmes created this Life Tributes page to make it easy to share your memories.