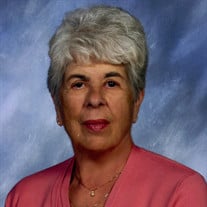 It is with profound sadness, we announce that Angeline Faiola passed away peacefully and on her own terms Tuesday, July 9, 2019. She was an exceptionally beloved wife, mother, grandmother, great-grandmother, and friend. Angeline entered this world on August 18, 1928 and was the first child in her family to be born in the United States. Her parents, Rosina and Luigi Gallo of Nocera, Terinese, Italy, preceded her in death as did one brother and 3 sisters. On September 11, 1951 she married her devoted husband John A. Faiola, in Vandergrift, PA. John retired as a Chief Master Sergeant in the United States Air Force with 30 years of service. Over the term of his service, they were stationed in a number of locations in the US and abroad. They were married for 28 years before he passed away on January 12, 1980. John was buried at Arlington National Cemetery with full military honors and Ange will finally be reunited by his side when she is buried with him. The years after her husband’s passing Ange lived a wonderfully full life surrounded by friends and family. Because of her military affiliation, she became a member of the American Legion Auxiliary and was a lifetime member of the Gold Star Wives (an organization for those who have lost their spouse to a military-related cause of death.) One of the great highlights of this organization was the annual convention trips she would share with travel with her daughters. Travel was another passion of hers and she was fortunate to be able to travel to Italy several times to visit the town where her parents were from. One such visit allowed her to share a once in a lifetime handshake with Pope John Paul II. She was a loyal sister and is survived by one sibling: Ellen (Silvio) Odasso, West Leechburg, PA and two brothers-in-law: Jim (Fran) Faiola, Pittsburg, PA & Robert (Catherine) Faiola of Camp Hill, PA. She will be fondly remembered and desperately missed by her two daughters: Kathleen (Michael) Pokojski of New Baden, IL & Helen (Richard) Anderson of Bethlehem, PA. The highlight of her life was her grandchildren: Michell (Jason) Stockmann of Breese, IL, Brian (Jessica) Pokojski of Highland, IL and Lauren (Ray) Midlam of Bethlehem, PA, but she gave her biggest smiles to her pride and joy, her great -grandchildren: Kinsey & Kylie Stockmann, Alexandra & Ella Pokojski, Raymond Midlam. Mamaw/Nana Ange cherished the relationships she had and found great joy in this new generation of little ones and was always interested in their day to day activities. Her hands were rarely still or empty. Sewing was her passion. For decades she was lovingly known as “The Sewing Fairy”. If you had clothing that needed mending you placed it on the table and within days it would be repaired and cleaned. She was a skilled seamstress and made numerous prom dresses, drapes, furniture upholstery, Halloween costumes, quilts, afghans and more. She gave her youngest granddaughter sewing lessons, who later designed her own clothing line. Ange's last great sewing accomplishment was the creation of 3 beautiful heirloom christening gowns that all of her great-grandchildren wore at their baptisms. When she wasn’t sewing, her hands were full praying one of her precious rosaries. She prayed the rosary daily, attended Padre Pio masses, and was devoted to the Blessed Mother. Her life was a living example of her faith and she practiced it by attending St. George parish in New Baden and teaching the Catholic Youth for many years as a religion teacher. Until her health condition made it impossible, Ange shared her faith and was very involved in prayer groups and bible study groups. If prayers were needed, Ange was on it. Although she was a homemaker for most of her life, to fill her time she also worked a decade at Stix, Baer & Fuller/ Dillard’s where she made many friends. A Funeral Mass of Christian Burial will be held at 1 p.m. Friday, July 19, 2019 at St. George Catholic Church in New Baden with Rev. Gene Neff & Rev. Dan Friedman officiating. Friends may call Friday, July 19, 2019 from 9:30 a.m. until 12:45 p.m. at St. George Catholic Church in New Baden. In lieu of flowers, the family requests that memorials made in memory of Angeline are suggested to Hospice of Southern Illinois, Gold Star Wives, or the American Legion Post 321 Auxiliary and will be received at church or Nordike Funeral Home, 15 E Hanover Street, New Baden, IL 62265 who is serving the family.

It is with profound sadness, we announce that Angeline Faiola passed away peacefully and on her own terms Tuesday, July 9, 2019. She was an exceptionally beloved wife, mother, grandmother, great-grandmother, and friend. Angeline entered... View Obituary & Service Information

The family of Angeline Faiola created this Life Tributes page to make it easy to share your memories.

It is with profound sadness, we announce that Angeline Faiola...

Send flowers to the Faiola family.