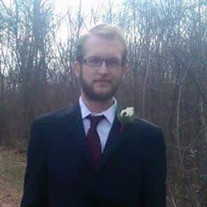 Andrew M. Stein, 22, of New Baden, died Thursday, September 1, 2016 in Pinedale, WY. He was born December 28, 1993 in Belleville, IL, the son of Jason K. and Michelle A. (Hawthorne) Stein. Andrew is survived by his father, Jason K. (Angela) Stein of Mascoutah, IL; his mother, Michelle A. (Micheal) Chavez of Pinedale, WY; a brother, Alex (fiancée, Kara) Stein of Ft. Collins, CO; grandparents, Nancy Hawthorne of Freeburg, IL, and Rose & Allen Stein of Mascoutah, IL; aunts and uncles, Chris & Craig Niebruegge, Ron & Debra Hawthorne, Karen & Richard O’Neill, Mike & Miki Stein, and Renee Stein; and numerous cousins and friends. He was preceded in death by his grandfather, Ron Hawthorne; and his best friend who he missed every day, Allan Horstman. Andy was an EMT. He enjoyed being outdoors, fishing, playing his guitar, spending time with friends, and liked to draw. A Memorial Service will be held at 3 p.m. Sunday, September 11, 2016 at Nordike Funeral Home in New Baden with The Rev. Hugh Fitz officiating. Friends may call Sunday, September 11, 2016 from 1 p.m. until 3 p.m. at Nordike Funeral Home in New Baden. Memorials may be made to the Denver Rescue Mission and will be received at the funeral home.

The family of Andrew M. Stein created this Life Tributes page to make it easy to share your memories.

Send flowers to the Stein family.