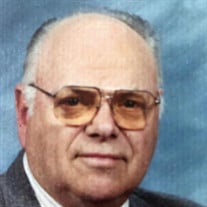 Aloys “Al” Huels, age 91, of Carlyle passed away on Monday, May 4, 2020 at Riverside Nursing Home in Alton, IL. He was born in Carlyle on August 13, 1928, the son of Anthony and Clara (Krebs) Huels. He married Kathryn Vercellino on November 21, 1956 at St. Mary’s Church in Carlyle. She preceded him in death on April 12, 2013. He is survived by his children: Dr. Lawrence Huels and wife Eileen of Alton, David Huels and wife Karen of Bloomington, and Dr. Michael Huels and wife Lety of Alton; grandchildren: Marc (Shadrah), Eric (Hope), Timothy, Abigail and Jessica; great grandchildren: Kaydence and Andrea; sister, Olive (Don) Gray of St Louis, MO; sister-In-Laws, Jane Huels of Breese and Angela Coleman of FL; as well as numerous nieces and nephews. In addition to his mother, father, and wife, he was preceded in death by his sisters: Cecilia (Herman) Wiedle & Virginia (Albert) Sprehe; his brothers: Bernard Huels and Robert Huels; brother-In-Law - Denny Coleman; and his nephew Philip Coleman Al was a lifelong dairyman and grain farmer retiring in 1987. He had a love for all animals including multiple Labradors. He grew up listening and following cardinal baseball especially Stan Musial and Red Schoendienst. He served his country in 1952 in US Army Corp of Engineers in Germany as a mechanic. Upon returning, he became an active member of the Knights of Columbus and St Mary’s Catholic Church in Carlyle. Private graveside services will be held at St. Mary’s Catholic Cemetery in Carlyle with Fr. George Mauck officiating. A memorial mass will be held at a later date at St. Mary’s Catholic Church in Carlyle. Memorials made in memory of Al are suggested to St Mary’s Catholic Church, Carlyle, IL and will be received at Nordike Funeral Home, 740 Fairfax Street, Carlyle, IL 62231.

The family of Al Huels will plan a memorial mass at St. Mary's Catholic Church in Carlyle at a later date

Send flowers to the Huels family.