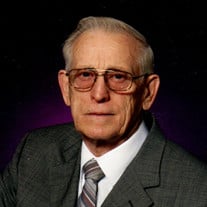 Allen E. Harem, 86, of Aviston, entered into peaceful rest surrounded by his family, Sunday, December 30, 2018 at Barnes-Jewish Hospital in St. Louis, MO. He was born November 4, 1932 in Winona, MN, the son of Omer and Dorothy, nee Davis, Harem. He married Vernell H. Wieter on June 23, 1956 at St. Francis Church in Aviston and she preceded him in death on October 24, 2010. Allen is survived by his children, Tom (Sheryl) Harem of Troy, Ron Harem of Aviston, Dennis (Jeanette) Harem of Gig Harbor, WA, Tina (Chris) Olson of Hebron, and Barb Maples of Mt. Olive; grandchildren, Jared Maples, Chris Maples, Brittany Eckhoff, Ariel Beck, Zak Olson, Brianna Olson, Cory Beyer, and Josh Harem; great-grandchildren, Ava Beck, Bentley Beck, Corbin Eckhoff, and Adelina Harem; his siblings, Joyce (Darrel) Johnson of Lacrescent, MN, and Bruce (Jan) Harem of Winona, MN; and brother-in-law and sisters-in-law, Mary Lou Harem of Loveland, CO, and Cornell & Katherine Wieter of Peoria, AZ; he is also survived by many special nieces and nephews. In addition to his parents and wife, he was preceded in death by his father-in-law and mother-in-law, Anthony & Helen Wieter; a grandson, Bradley Harem; two sisters, Maureen Aldinger and Geraldine Krage; a brother, David Harem; and brothers-in-law and sister-in-law, George Krage, Ralph & Lupe Wieter, Vernon Wieter, Jerome “Tojo” Wieter, James Wieter, and Gaylord Aldinger. Allen was a U.S. Air Force veteran and served as a staff sergeant during the Korean War. He was a member and past Commander of the American Legion Post 1239 in Aviston. He was retired from McDonnell Douglas Aircraft Company. Allen was an active member of St. Francis Church in Aviston where he served as an usher and also served at funerals. He assisted with the delivery of Meals on Wheels and was a member of St. Joseph’s Hospital Auxiliary in Breese. He was a member of the Knights of Columbus Council #11110 of Aviston and a member of the Clinton County Farm Bureau. Allen was passionate about flying his self- constructed airplane and enjoyed his Allis Chalmers tractors. He always looked forward to his annual deer hunting trips with his sons, grandsons, and friends, and would later enjoy sharing stories from the trips. Allen valued time spent with family and his kindness left others with appreciation of his presence. Funeral Services will be held at 11 a.m. Saturday, January 5, 2019 at Nordike Funeral Home in Aviston. Burial with full military honors will follow at St. Francis Cemetery in Aviston. Visitation will be held on Saturday, January 5, 2019 from 8 a.m. until time of service at Nordike Funeral Home in Aviston. The American Legion will have a walk thru at 10:30 a.m. Saturday at the funeral home. Memorials may be made to St. Francis Parish and will be received at the funeral home.

The family of Allen E. Harem created this Life Tributes page to make it easy to share your memories.

Send flowers to the Harem family.