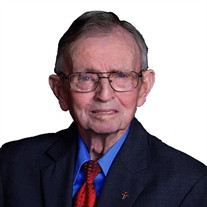 Alfred Henry Hugo, age 93, of Hoffman, passed away at St. Mary’s Hospital in Centralia on Friday, November 17, 2017. Alfred was born in rural Hoffman on November 1, 1924, the son of Edward & Hulda (Tyberendt) Hugo. He married Garnell Mattmiller on September 9, 1950. Mr. Hugo is survived by his wife of 67 years, his four children: Ramona Kuchman of Centralia, Roxann Knuf of Carlyle, Rhonda (Lenny) Mackie of Carlyle, & Roger Hugo of Hoffman; his sister, Lorraine Reinkensmeyer of Centralia, ten grandchildren & sixteen great grandchildren and many nieces and nephews. Alfred was preceded in death by his parents, an infant daughter, Mary Margaret Hugo; his son-in-law, Steve Knuf; two brothers: Edgar (Fayola) Hugo & Herbert (Barbara) Hugo; a sister, Bernice (Clarence) Little; sisters-in-law: Loretta (Amos) Tyberendt and Wanda; brother-in-law, Jack Reynolds; & his grandson: Ken Fischer. Mr. Hugo was a member of Trinity Lutheran Church in Hoffman where he also served as a passed Trustee for both the school & church. He was a lifelong farmer & enjoyed wood working in his free time. He volunteered his time around the church fixing things & helping with projects. Alfred enjoyed playing cards & attending fish fry’s. He loved his family dearly & cherished all of his time with them. Funeral services will be held at Trinity Lutheran Church in Hoffman on Tuesday, November 21, 2017, at 11:00 am with Pastor Stephen Krenz officiating. Burial will follow at Trinity Lutheran Cemetery in Hoffman. Visitation for Mr. Hugo will be held on Monday, November 20, 2017 from 4 until 7:00 pm at Trinity Lutheran Church in Hoffman and again on Tuesday from 9 until the time of services, also at the church. Expression of sympathy for the Hugo family are suggested to Trinity Lutheran Church and will be received at church or at Nordike Funeral Home, 740 Fairfax Street, Carlyle, IL 62231.

The family of Alfred H. Hugo created this Life Tributes page to make it easy to share your memories.