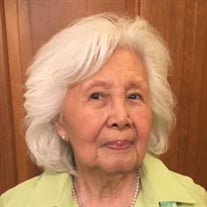 Afra G. Guiab, age 94, of Carlyle passed away on Friday, February 11, 2022, at her home in Carlyle, surrounded by her family. She was born on May 24, 1927, in Bagabag, Nueva Vizcaya, Philippines, the daughter of Maria (nee: de la Cruz) and Manuel Gumiran. Afra married her husband, Juan B. Guiab on June 1, 1947, and after 52 years of marriage, he preceded her in death on December 18, 1999. Afra is survived by her children: Jane Guiab, Cristina (Mike) Carbonero, Josefina (Lane) Sullivan, John Jr. (Marissa) Guiab, Eugene (Bob) Guiab, and Virginia (Hon. Dennis) Middendorff. She is also survived by grandchildren John (Nicole) Brady, Irene Brady and John Martin, Drs. Daniel (Maricel) Brady, Jennifer (Joe) Martinez, Michele Carbonero and Tom Bourassa, Angelina (Paul) Jones, Jeffrey (Patricia) Sullivan, Kevin (Laura) Sullivan, Thomas Sullivan, Christian Guiab, Brian Guiab, Aimee Guiab, Nicole Middendorff, Dr. Christopher Middendorff, Mark Middendorff, Lauren (Capt. Devin) Heckenkemper, Paul (Michelle) Middendorff, twenty-four great-grandchildren and numerous nieces and nephews. Also surviving are her brother, Salcedo Gumiran, and her sisters, Dr. Prudencia Banez, Restituta Cabiao, and Fedelina Tolentino. In addition to her husband, she was preceded in death by her beloved son, Jerome Guiab, her parents; three brothers, Derio Gumiran, Efrin Gumiran, Cobo Gumiran; one sister, Loling Guiab; and six brothers-in-law and sisters-in-law. Afra grew up in the rural town of Bagabag, Nueva Vizcaya, Philippines. As a young girl, she left home and studied to become a nun until the Japanese invasion of the Philippines at the outbreak of W.W. II forced her into hiding. After the war, she taught at Immaculate Conception elementary school in Banawe, Ifugao Province and later went to school to become a seamstress. She married Juan, a decorated veteran of the United States Army in 1947. They immigrated to the United States in 1955 with their four oldest children, and while Afra was pregnant with their fifth child. Afra, Juan, and their children settled in Chicago where she lived for over thirty-five years. Upon her retirement, Afra and Juan moved to Carlyle, where she lived for the remainder of her life. Afra was a stay-at-home mom until her youngest child started high school. She held various jobs in Chicago before retiring as a customer service representative for Combined Insurance Company. Her favorite pastimes were sewing, crocheting, knitting, embroidery, and creating one-of-a-kind heirlooms for her family. She enjoyed making and donating blankets for Project Linus. She treasured the time spent with her children, grandchildren, and great-grandchildren. Her weekly Sunday dinners, cooking traditional Filipino dishes, will be remembered forever. She was a devout member of St. Ignatius of Loyola Parish in Chicago and then of St. Mary’s Parish in Carlyle. Afra was profoundly faithful, lived by example, attended Mass, prayed the rosary, read her Bible every day, and knew that faith, hope, and love is all that we need. A Funeral Mass of Christian Burial will be held at 10:30 am on Saturday, February 26, 2022, at St. Mary’s Catholic Church in Carlyle. Interment will take place at Calvary Cemetery, Evanston, IL on March 5, 2022. Visitation will be held from 9:00 am until the time of service on February 26th at St. Mary’s church in Carlyle. Memorials made in memory of Afra are suggested to St. Mary’s Parish Cemetery and will be received at Nordike Funeral Home, 740 Fairfax Street, Carlyle, IL 62231.

Afra G. Guiab, age 94, of Carlyle passed away on Friday, February 11, 2022, at her home in Carlyle, surrounded by her family. She was born on May 24, 1927, in Bagabag, Nueva Vizcaya, Philippines, the daughter of Maria (nee: de la Cruz) and... View Obituary & Service Information

The family of Afra G. Guiab created this Life Tributes page to make it easy to share your memories.

Send flowers to the Guiab family.